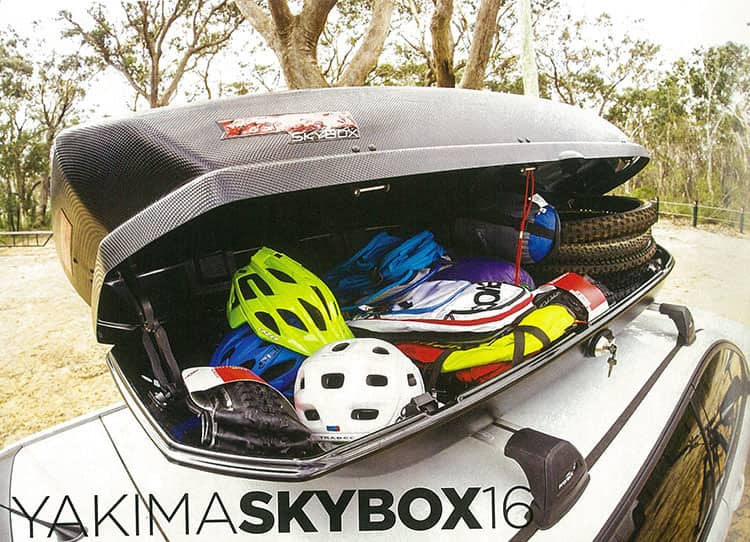 I’d never really seen the point of those big cargo storage boxes that outdoorsy types drive around bolted to the roofs of their cars. Like, if you can’t fit your gear inside your car then pack less, or, get a bigger bloody car. Right? For this reason I wasn’t exactly jumping out of my skin with excitement when we were offered one to test. However, having now used one for the past few months, I’ve totally changed my tune on roof mounted cargo boxes. If you can take more stuff when you head off on a MTB trip, or go racing for a weekend, you’d be silly not too. And, if you can take a heap of extra stuff without having to wedge it all into your car, and instead carry it on the roof ‘out of sight and out of mind’ then that is even better!

Yakima have named their cargo carrier ‘SkyBox’ which sounds pretty badass and they also look hella sweet, sleek and aerodynamic too we reckon. Offered 4 different sizes, the model we’ve been using is a SkyBox 16 which has a capacity of 453 litres. It looks pretty massive and it’s crazy how much gear we’ve been managing to carry around in it. This makes it kind of scary to think that our size ‘16’ Box is in fact the second smallest in the range. The largest model (SkyBox 21) fits an insane 595 litre capacity! I’ve lived in apartments with less space than that. Anyways, our SkyBox features a ‘carbonite’ textured lid, which is quite similar to the dimples on a golf ball. It looks cool and it evidently helps reduce wind drag and air noise. Whilst the box appears massive and therefore heavy, it is surprisingly light, weighing just 16 kilos. This makes it possible to install, or remove, without needing the assistance of an extra set of hands. The SkyBox has a hook and clamp mounting system which allows it to be fitted to most roof rack bar shapes.

It also has a tool-free installation feature which is always a plus for us. The SkyBox lid opens from both sides. Whether you mount it closer to the driver’s side or passenger’s side of your car, this dual-side opening lets you easily access your cargo. Its fortified lid has an easy-access edge and spring-loaded hinges that allow for smooth, one-handed operation. The extra-stiff lid also helps reduce road noise and vibration, and it guards against dents and scratches when the box is in storage.

The SkyBox has SuperLatch security latches on both sides to ensure that the lid is completely closed. The SuperLatch prevents you from removing the key from the lock unless all 3 internal latches are engaged. That way, you are prevented from removing the key and driving off with an unlocked box. Another thing that we really dig about using a roof mounted cargo box, and hasn’t thought of when we were hating on them earlier, is being able to throw wet or dirty gear in the box and not worry about getting the interior of your car getting dirty, smell and trashed.

It really is surprising how much gear we’ve been able to pack into our SkyBox. It has proven particularly handy for all those spare tyres, in fact we find ourselves now travelling with a heap more tyre options these days as taking them with us and having more tyre options at a race, or on a riding trip, is something that is worth its weight in gold. All in all, we are now totally convinced the concept of roof mounted cargo boxes and we find ourselves having been won-over by the Yakima SkyBox’s practicality and ease of use. What’s more, at $749 it’s a hell of a lot cheaper than buying a trailer to carry all of your gear!